Hello lovelies! I realize it's been ages since I've posted, but I promise there's a good reason. About a year ago, I decided to take a college psychology class, for reasons that will take longer to explain than your attention span will last, I'm sure. I figured if I spent all the time I'd been dedicating to writing on the class instead, I could knock it out in a month or so. (HA!)

As it turns out, I took the final exam five days ago, only eleven months and two weeks after I started the class, (and two weeks before the deadline to complete it!). It turns out that I can't actually be a writer, mom to five kids, part-time ortho assistant, frequent church volunteer, AND a student. I just can't do it--we finally found my breaking point, folks. But the good news is, the class is over, and I can now psychoanalyze my kids (and my fictional characters).

During the past year while I worked through the class, I was also querying my latest manuscript. (For those of you thinking, 'Wait, I thought she already had an agent, why is she querying?', you are right. I did have an agent. But she decided to leave the business in early 2018, so I went back to the query trenches).

Which brings us to the exciting news of the day--I HAVE A NEW AGENT!!! Actually, agents.

Want to hear all the details? Of course you do. Read on... 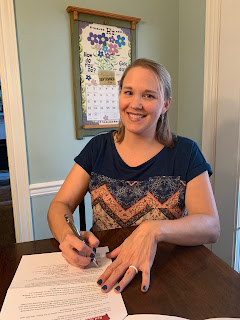 So, way back in, like, September or something (almost a year ago), I sent my query out to a handful of my top choice agents. One of them, Dawn Frederick, responded almost immediately with a full request. That never happens. Or at least it had never happened to me. I was over the moon. I sent it off to her and turned my attention to my psychology class, which I had just registered for.

Come December, I'd gone through several chapters of my class, but had realized that I burn out a LOT faster studying psychology than I do writing. It was clear that the class was going to take a lot longer than I'd thought it would. By this time, I also had a completely new first chapter of my manuscript based on feedback I'd received from some of the other queries I'd sent out. I hadn't heard anything back on the full that I'd sent Dawn, so I took a chance and emailed her to check in and see if she'd like the revised version. She hadn't had a chance to read it yet, so I sent her the new one. A few weeks later she responded that she LOVED it, but wanted to see several big changes with it before she'd consider offering. She asked if I'd like to revise and resubmit to her. Of course I said yes, and got right to work.

I was like a writing ninja during the month of January, working feverishly on my rewrite, and I sent it back to her at the end of the month, five-ish weeks after getting the R&R. Dawn very kindly suggested that I take a little longer to work on it, and ensure a few beta reads on the new version before having her read it again. That was hard to hear after working so hard on it, but I took a step back, sent it to some of my critique partners, and once again turned my focus to psychology. 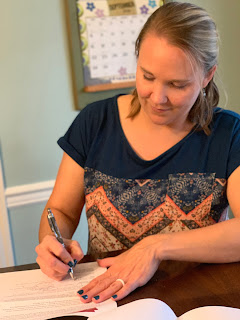 Several months later, I had lots of feedback and a fresh set of eyes, and I grudgingly accepted that the extra time had been a good idea. I tackled yet another rewrite and sent Dawn the final revised version in May. Unbeknownst to me, she'd had to cut back on her work hours while healing from knee surgery, so she didn't get to it right away. I once again worked on my psychology class. My kids got out of school for the summer, we went on some amazing vacations, we swam a lot, and my 18-year-old spread his wings and flew from the nest--all the way to Brazil, where he is now on a church mission. So we had a busy, busy summer. By this point I'd realized that I needed to kick it into high gear if I was going to finish my psychology class before the deadline. So I kept at it, trying not to think about that fact that Dawn had my revised version and I had no idea if she'd love it or hate it.

It turns out that she loved it. Enough to share with the rest of her team, and on July 30th, she emailed to say that both her and Kelly Van Sant were interested in co-agenting, and that they wanted to "tawk"(!!). We talked, our visions matched, and I accepted their offer of rep a week later. I am seriously so excited for the opportunity to work with these two powerhouse women. 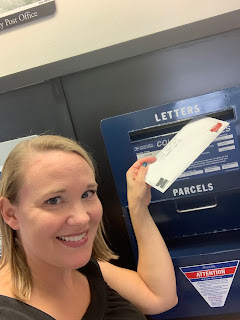