When To Now blog tour 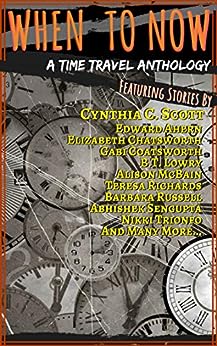 This week I'm celebrating the release of my time travel story, Turns of Fate, in an anthology called When To Now. This anthology is published by The Fairfield Scribes, the writing group responsible for turning me from a newbie writer with stars in my eyes into what I am today.

I suppose I still have stars in my eyes--really, I don't know how anyone can pursue publication without the benefit of a little stardust--but I've grown so much since becoming a part of the Scribes. When To Now is the Scribes' second anthology, and it's all about time travel.

My first venture into time travel writing was in my first published book, Emerald Bound. The sequel, Topaz Reign, dove in even more. But time travel was never meant to be the central element of either of those books, and when the Scribes proposed the idea of doing an entire anthology on time travel alone, I was in!

In Turns of Fate, I decided to turn time travel on it's head. Rather than exploring the past and all the ramifications of time travel by having my characters go back in time, I decided to set my story far into the future. In this future, the ability to time travel is given by a specific gene, and through genetic engineering, nearly everyone in this society now has the ability to travel back in time. It's as simple as flexing  a muscle. But what they didn't count on when they started genetically gifting people with the ability to time travel, was the idea that the space-time-continuum was a natural resource that, just like the ozone layer, could be depleted. So now there are government regulations on how often a person can time travel, and, worse, they've found that the depleting space-time-continuum means they can't travel back as far as they used to. In fact, levels are so critical that the farthest anyone can go back now is thirty seconds. But because time travel produces a rush that so many people are addicted to, they still do it, giving us a society on the brink of collapse.

Within this setting, Turns of Fate is a YA story about a girl navigating her social and family life much like teens do today. She hasn't time turned in over a decade because, really, what good is a thirty second rewind anyway? Especially when the government incentivizes citizens not to travel by offering monetary compensation. But when something happens at work that humiliates her beyond repair, she decides she might need that thirty-second rewind after all. She just forgets to consider the cost.

And--enter the age-old question--will she really be able to change anything anyway?

I hope you enjoy Turns of Fate and all the other amazing stories in the When to Now anthology--The Scribes are a talented group of writers. You can find the book here.

The blog tour is almost over, but check in here tomorrow for the final stop. Happy time jumping!