I'm so excited to be participating in this birthday BLOG HOP for Evernight Teen's 3rd BIRTHDAY. It's their birthday, but they're giving out the presents with a Grand Prize of a $100 Amazon gift certificate! 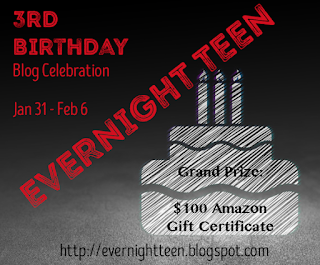 Evernight Teen books feature fresh teen fiction that is raw, gritty and real. Whether paranormal, contemporary, sci-fi or suspense, Evernight Teen's books are about real issues and pack a strong emotional punch. You'll find cutting edge fiction that today's young adults can relate to and will keep you turning the pages long into the night.

I feel so lucky to be an Evernight Teen author! Here's a teaser from my book, Emerald Bound. 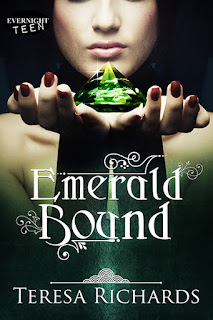 Book Blurb:
A princess, a pea, and a tower of mattresses. This is the sliver that survives of a story more nightmare than fairy tale.

Maggie Rhodes, high school junior and semi-reformed stalker, learns the tale’s true roots after a spying attempt goes awry and her best friend Kate ends up as the victim of an ancient curse. At the center of the curse lies an enchanted emerald that has been residing quietly in a museum for the past fifty years. Admirers of the gem have no idea that it feeds on life. Or that it’s found its next victim in Kate.

Enter Lindy, a school acquaintance who knows more than she’s letting on, and Garon, a handsome stranger claiming he knows how to help, and Maggie is left wondering who to trust and how to save her best friend before it’s too late.

If only Maggie knew her connection to the fairy tale was rooted far deeper than an endangered best friend.

A part of me died long ago. It was the part of me that feels and it was Calista's fault.
What happened tonight was nothing new—innocent victims welcomed into our home, not knowing they would never leave. I learned long ago I could not help them, so I stopped trying.
But this time something was different. This time I was awake, burning with a gut-wrenching guilt, as the next victims slept downstairs. This time I knew the victims. And they didn’t deserve what was coming.
It had always been hard for me to make friends. I’d been called loner, loser, outcast, and freak. Even still, I remembered Maggie offering to show me around when I first transferred to their school. Through her, I met Kate and Piper. The three of them were always nice to me, while other kids kept their distance and spread rumors behind my back. I told myself I didn’t care—I wasn’t like them.
But being a loner was lonely.
So tonight when I saw Maggie and her friends here, something inside me snapped. Or, perhaps it was the dead piece of me coming back to life. Now I cared desperately about what was happening in the room below mine.
But there was still nothing I could do.
Calista usually lured in victims from out of town to avoid arousing suspicion. Pregnant ones were a particular favorite—easy prey, she called them. But Maggie and her friends came here all on their own. The opportunity was too good for Calista to pass up.
Everyone thought Calista was my mother, but she wasn’t.
Back in my day, almost four centuries ago, Calista had an alternate method of luring in victims. She and her husband, Theodore, advertised for hired help with their inn. The number of parents willing to sell their daughters into a life of servitude in exchange for a forgiven debt or a clean slate was staggering.
My father was one of them.
By the time my mother found out what he’d done, it was too late. There was no escape. I was bound.
My story was well known in this land, whispered as a bedtime tale to ease children into sleep. But, just like any other story passed down through time by rumors and idle gossip, the fragment that survived was woefully incomplete. It began something like this:
There is rumored to have been (once upon a time, of course) a princess, a pea, and a tower of mattresses.
That much was true, though in actuality it was only one mattress, not twenty. The pea was also real, though most would call it a precious stone—an emerald, to be precise.
The gem that sealed my fate was now in the Smithsonian Museum of Natural History in Washington D.C. Calista was furious when she found it missing. She thought I’d stolen it until she remembered my limits. The identity of the true thief remains unknown.
Even though the emerald is no longer in our possession, we are still bound to it, as it is bound to us. Admirers of the opulent necklace where it rests don’t understand it. Like me, the gem is a prisoner, struggling against its fate.
Even now, centuries later, I don’t understand all the details of what happened to me that night. But it began with a troubled slumber on a bed of enchanted emeralds.


Be sure to visit each stop on the BLOG HOP for more chances to WIN the GRAND PRIZE of a $100 Amazon Gift Card. You'll receive bonus entries for commenting on each blog!


a Rafflecopter giveaway
Posted by byutm33 at 5:23 AM