I Have an Agent! My Story and a Giveaway

Once upon a time, I got bored and wrote a book. (Okay, it wasn't quite as simple as that, but that's the gist of it). It turned into quite a good book. I loved it very much and wanted to share it with people.

Because, you know, that's what you do with art. You create it, refine it, and then you share it.

Thus began my search for an agent. Which, I was sure, would be quick and painless.

Fast forward three years, a hundred-or-so rejection letters, one brutally honest (read: endearing, crass, brilliant and now friends forever) writing group, and I'd been thoroughly humbled. Then I had my second manuscript accepted for publication by a smaller press called Evernight Teen. This publisher did not require me to have an agent before submitting to them. Although I had a very pleasant experience working with them and I loved the way my debut, Emerald Bound, turned out, I still wanted an agent.

My third manuscript was a YA contemporary suspense totally unrelated to Emerald Bound. It's called Windfall, and it's about a girl who wins the lottery on her eighteenth birthday, only to find herself caught in a major corporate scandal in which the lottery was rigged and she's the pawn in someone else's life or death game.

I started querying this manuscript to agents at the end of February, 2016. In May, I entered a contest hosted by author Michelle Hauck called Query Kombat. I made it in (HUGE thank you to Michelle, for picking me for her team) and, during the month of June, got some fantastic feedback on my query and opening page. I made it through several rounds of the contest and received eight requests by agents wanting to see more material. This was the highest number of requests on my team.

One of those requesting agents was Uwe Stender, the founder of TriadaUS. I sent the material to him, along with the other agents, and then waited.

I worked on another writing project. I enjoyed summer. I went on vacation with my family. I sent out more queries. I got my kids started back at school.

By mid-August, I'd heard back from a couple of the other requesting agents with either rejections or requests for more material, but hadn't heard back from Uwe. Since Triada is well-known for its quick response time (their query guidelines state that if they don't respond within two weeks then they didn't receive your query), I decided to follow up to make sure he'd received the material I'd sent him. He responded right away that it must have slipped through the cracks and that he'd take a look soon. I am *so* glad I followed up!

Two weeks later, he emailed and said that he'd passed it along to one of his agent assistants, Mallory Brown, who wanted to see the whole thing. Five days after that, Mallory emailed me with an offer of representation! She listed all the things she loved about Windfall and all the ways she'd connected to the story! After talking with her on the phone and hearing her enthusiasm, I was convinced she was the right agent for me and the perfect person to pitch my book to editors.

And now it's official!

I'm thrilled to announce that I've joined #TeamTriada and am rep'd by Mallory Brown!

Of course, news this big requires a celebration. Since I did things a little backward and already have a book out, I'm going to celebrate with a giveaway! Up for grabs is an Emerald Bound prize pack, including a signed copy of the book, a metal Shepherd's-hook bookmark with emerald charm, and a custom-made Emerald Bound key chain. 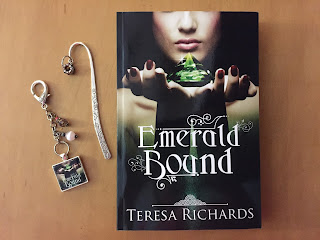 (Emerald Bound is a dark YA retelling of The Princess and the Pea, in which the pea is an enchanted, life-sucking emerald. Use the rafflecoptor below to enter. The giveaway will be live for two weeks.)

For those who are interested, here are my query stats for Windfall:

Just as a side note, the bulk of those 79 queries were sent out before Query Kombat. I had a much higher request rate on the queries I sent after incorporating feedback from the competition. If you ever have the chance to enter Query Kombat, or even stalk the entries and read through the feedback they're getting, DO IT!

And now, if you'll excuse me, I must go finish my happy dance.